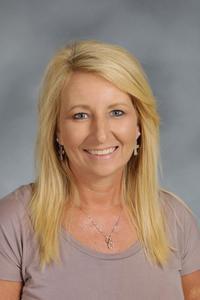 Teresa Grigg, is the the Lead Nurse for th Nixa School district.

In 2017 she transferred to the Early Childhood program from Matthews elementary.  Nurse Teresa grew up in Mtn. Home, Arkansas and has lived in North Carolina and Northern Missouri, before moving to this area in 2008. Teresa graduated with from Arkansas State University with her BSN. She gained ER experience working in a small rural hospital. She soon earned her certification in Arkansas as a Nurse Practitioner and began caring for teens in multiple counties for the AR Department of Health. Later, she worked as a nursing supervisor in a large OB/Gyn practice. After moving to this area with three school aged children, she chose to begin her school nursing career at Mathews Elementary in 2008. She accepted the position of Lead Nurse for Nixa Schools in 2015. Teresa finds joy in helping our students and staff on a daily basis. She also enjoys how her job allows her to assist families who have children with health concerns, mild or severe, be able to come to school just like other kids.