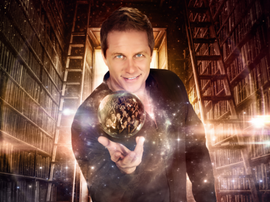 Aetos Center for the Performing Arts

As the winner of NBC’s hit TV show ‘Phenomenon’, Mike Super is the only magician in history to win a LIVE magic competition on primetime U.S. network television and voted America’s Favorite Mystifier! Mike is also a top finalist on NBC’s #1 rated summer series America’s Got Talent and Penn & Teller: ‘Fool Us.’

Imagine mind blowing illusions combined with the hilarity of a headline comedian. Mike Super has taken the performance of magic to new, mainstream levels that will reach out and literally touch you! Mike’s turned the magic show on its side and dumped it out into the audience! YOU become Mike’s onstage assistant! Enjoy this family-friendly performance and join the journey of emotions from laughter, intrigue, danger, fear, wonder, anticipation, tears and sentimentality that only Mike Super delivers.

As part of the Aetos Center for the Performing Arts' Inaugural Season, Mike Super has been challenged to attempt to vanish a vehicle from Ozark’s Chevrolet and make it reappear on the AETOS stage! Can he do it? If he succeeds, this means you may have a chance to take part in making your dream vehicle appear on stage in which every audience member has a chance to win!!!*

*Winner must be of legal driving age with valid driver’s license in attendance at the show.